TORONTO, Aug. 10, 2020 — Trigon Metals Inc. (TSX-V: TM) (“Trigon” or the “Company”) is pleased to report assay results from an elementary exploratory drilling program at the Company’s Silver Hill copper-silver project (“the Project”) in Morocco (see table and figures below). The results reported are from exploratory drilling undertaken by Trigon’s acquisition target Technomine Africa SARL (“Technomine”), based on the local company’s knowledge of the area. A formal drill program is now being planned by Trigon, as more fully described below.

For the purposes of the latest preliminary drilling, Technomine had use of a small underpowered rig only capable of drilling shallow holes, of which three of the four reached the targeted mineralized structure, and two of the four ended in mineralization.  The recent results demonstrate good mineralization over a larger than expected horizon. To advance the project, Trigon will utilize these encouraging results to design and implement a full exploration program to required standards.

The latest results are highlighted by:

Holes were drilled at a 70° angle and drill intercepts are presumed to represent true width of the structure. Silver Hill Hole S2 did not reach the mineralized layer. The hole reached a maximum depth of 36 metres.

Jed Richardson, President and CEO of Trigon Metals, said, “We are very pleased by these initial results from Silver Hill, which demonstrate that the high grade surface samples we initially received were indicative of the mineralization underneath, and show there are notable grades of silver and copper in the rock above and below the visibly mineralized layer. Particularly encouraging were certain results that showed very little visible mineralization but returned very high copper grades at the end of the hole, suggesting more mineralization may occur beyond the reach of the drill hole. In S1, the upper portions of the mineralized layer showed elevated grades of copper before silver grades increased as the hole went deeper. We are encouraged to test S4 and S6 – holes that were visibly similar but were not initially analyzed because time was limited for sample preparation.”

As indicated above (see Table 1 – Silver Hill Drill Results), work has begun on site at Silver Hill for Trigon’s own program to test the extent of this mineralization. Trigon has planned drilling and systematic surface sampling to test the down dip extension of the mineralization delineated in this drilling, to test the relationship between the upper structure (focus of the reported drilling) and the two other structures identified in early surface sampling (see Figure 1 – Silver Hill Global Map), and connect the upper structure to what appears to be lateral extension, identified by ancient workings almost 1.5 km to 2 km away. 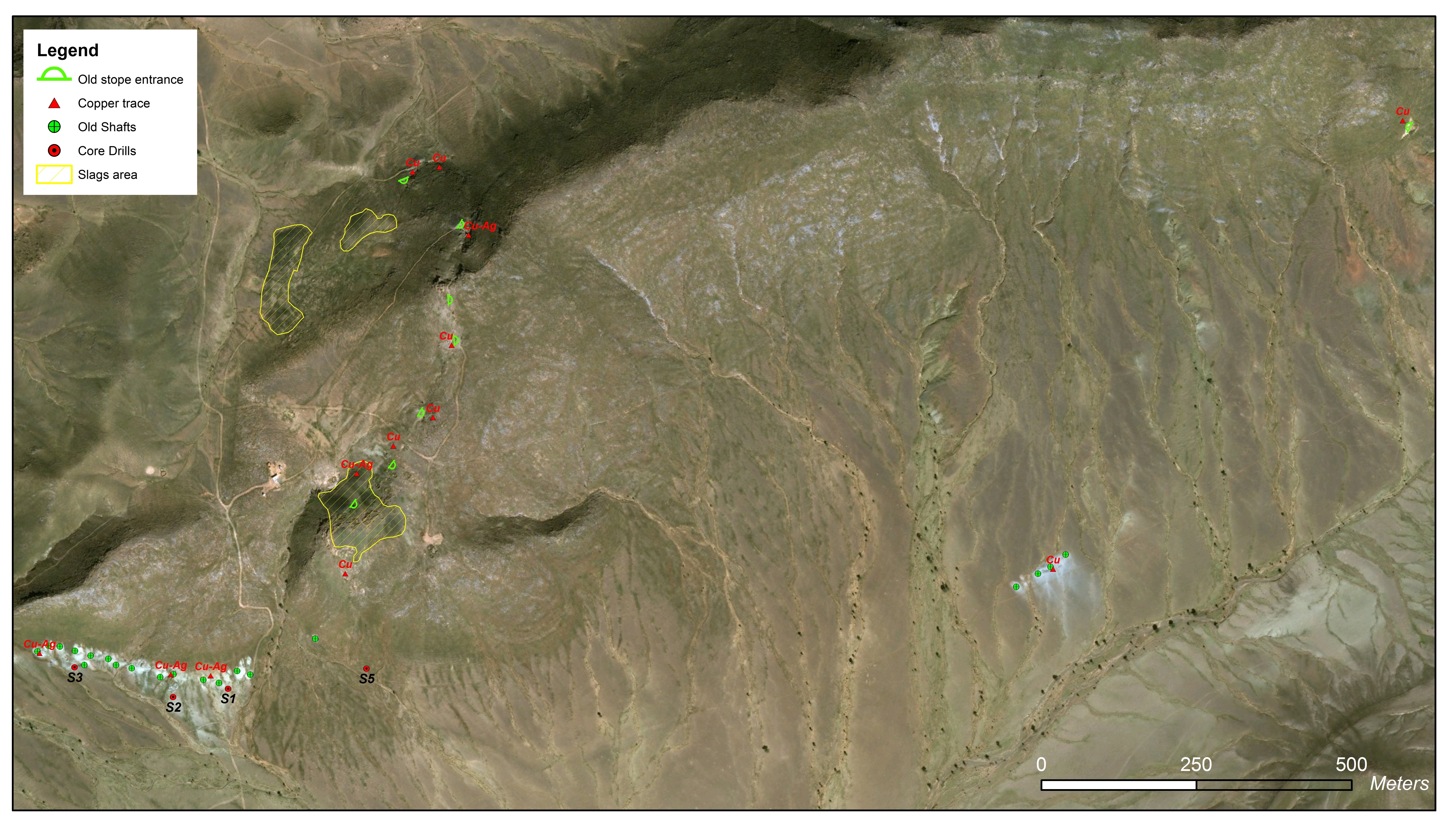 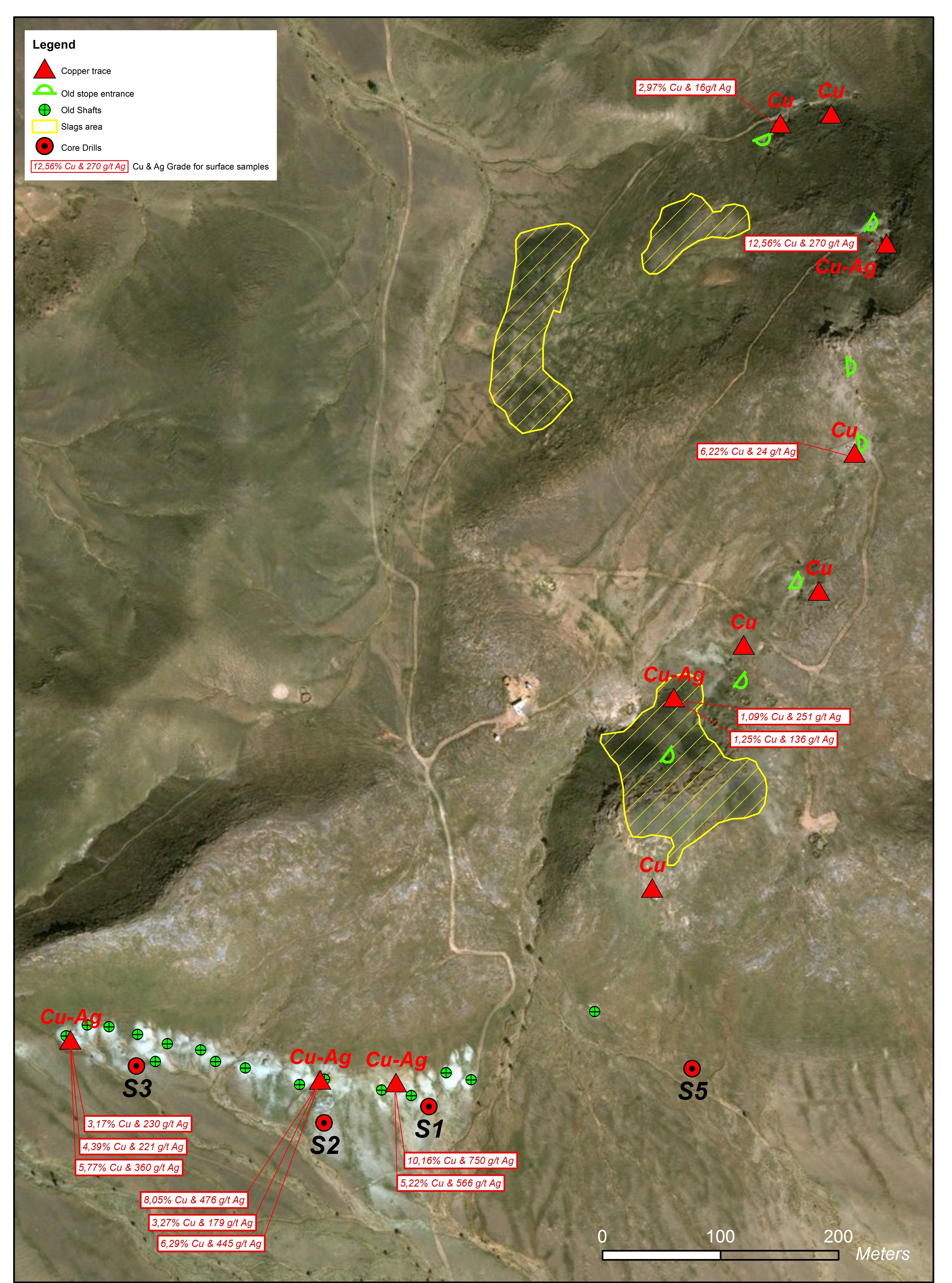 The Silver Hill Project is a 16km2 property in the Anti-Atlas region of Morocco.  The Project is located at a regional address well known for base metals occurrences in Morocco.  Morocco has a mining history that stretches over 100 years and is well known for being a mining friendly jurisdiction. Preliminary surface exploration shows copper and silver mineralization at high grades distributed over a wide surface area. Slags from ancient workings indicate historical large-scale mining for silver. As noted in the press release dated August 4, 2020, closing of the transaction is expected to occur shortly.

The technical information presented in this press release has been reviewed and approved for disclosure by Fanie Müller, P.Eng, VP Operations of Trigon, who is a Qualified Person as defined by NI 43-101.

Trigon is a publicly traded Canadian exploration and development company with its core business focused on copper and silver holdings in mine-friendly African jurisdictions. Currently the company has operations in Namibia and Morocco. Namibia is one of the world’s most prospective copper regions, where Trigon has substantial assets in place. The Company continues to hold an 80% interest in five mining licences in the Otavi Mountainlands, an area of Namibia widely recognized for its high-grade copper deposits where the Company is focused on exploration and re-development of the previously producing Kombat mine.  The Company is also currently finalising the acquisition of the Silver Hill project, a highly prospective copper and silver exploration project in Morocco.

This news release may contain forward-looking statements. These statements include statements regarding the exploratory drill program at Silver Hill and the results thereof, the future exploration plans for Silver Hill, the prospectivity of the Project, the Company’s ability to explore and advance the Project, the impact of COVID-19 on the Company’s operations,  the Company’s strategies and the Company’s abilities to execute such strategies, and the Company’s future plans and objectives. These statements are based on current expectations and assumptions that are subject to risks and uncertainties. Actual results could differ materially because of factors discussed in the management discussion and analysis section of our interim and most recent annual financial statements or other reports and filings with the TSX Venture Exchange and applicable Canadian securities regulations. We do not assume any obligation to update any forward-looking statements, except as required by applicable laws.

View all posts by bruna →